Got a question about The FLOCK? Perhaps you aren't the only one. Here are a few of the questions received most often and their answers. . .

Q: I started from the beginning and I don't have some of the kits. Have I missed something? 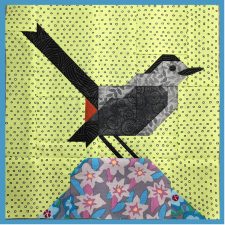 Most likely, you haven't missed anything, but it might appear that you have. The FLOCK started unofficially in October 2017 with a small group of beta test quilters. With the laser cut kits and the complex systems involved in delivering the monthly block kits, I wanted to make sure that the program details were running smoothly with a small group before I opened the membership up to folks starting officially in January 2018. Toward the end of 2017, the beta group received three months of blocks: the American Robin, the Gray Catbird, and the Tufted Titmouse during the three month beta test period.

Since many of the Beta Testers continued on with The FLOCK into 2018, I couldn't use those beta-released birds as a brand new monthly block without duplicating them for the beta folks, so the robin became an option when folks joined because it's a bit easier to make, and it represents a good introduction to working with laser cut piecing, and the catbird and titmouse have always been available to purchase individually to anyone with an active FLOCK membership. You can find all the birds that have been released AND revealed in the shopping cart. To make a purchase, you must be logged into the site for the shopping cart to recognize you as a member.

First of all, if you didn't start at the official January 2018 start date, you aren't behind! The program has no defined start date (although the first blocks were available in January 2018, or October 2017 for the Beta Test group--see the question directly above) and no official end date. You may collect the blocks as they arrive each month with your membership, and you can stop your membership at any time. If you want to go back and purchase blocks that you may have missed, you can do that, too! Once the blocks are revealed, they are available to purchase (only by FLOCK members) from the shopping cart. Since block purchases are only available to current FLOCK members, you have to be logged in to the website to purchase the individual FLOCK kits.

Go to https://hummingbird-highway.com/my-account/ and enter your email and password. If you can't remember your password, then click on the "Lost My Password" link, and the system will walk you through setting up a new one.

Q: What's with all the dates?

There are a couple dates each month that are notable for The FLOCK:

Can I post pictures of my blocks to social media?

YES. Absolutely! However, so as not to spoil the fun for our distant FLOCK members, please post photos to social media only after you've received your templates. Since folks may ask for more information , it might be helpful to link back to The FLOCK page here at Hummingbird Highway.

Oh, no! My billing/shipping notification says NY and I don't live in NY!

Don't worry. The shipping software used at the Hummingbird Highway  automatically corrects your address for the shipping label based on your zip code. Your package will be shipped to the correct state, even though the email notification isn't correct.

I'm a FLOCK Lite Member. How can I tell what bird is flying in next?

While I don’t maintain a listing of the upcoming Lite pattern releases, you can find them by looking at the FLOCK fabric kit listing. This will take you to the member area of the shopping cart (you have to be logged into the site to see the kits and their descriptions - scroll up for Log in tips)

Once you’re at the kit listing page, you can see what’s coming by clicking on each photo. You will then be inside the shopping cart item. Just below where it says "add to cart," notice the first four numbers of the SKU, starting with the last two digits of the year (19, for example) and the month 05 (May) of this kit's original release date - May 2019. Since FLOCK Lite kits are released one year after their original release as a fabric kit, this pattern will be the LITE delivery for May 2020.

Here are the Lite bird

releases for the next few months, taking you to the end of 2022.

How Do I cancel my subscription?

We hate to see you go, but, hey, things change. The beauty of The FLOCK is that you can start or end your membership at any time. You can access your membership details, including changing an address, updating payment information, or cancelling your membership when you are logged into the site--Go to https://hummingbird-highway.com/my-account/ and enter your email and password; if you can't remember your password, then click on the "Lost My Password" link, and the system will walk you through setting up a new one. Or just send an email with the request to discontinue your membership and we'll take it from there. You may join The FLOCK again at a future point, if you wish, however, any incentives that were available for your original subscription date will no longer apply.

Please note: No refunds, no returns, or exchanges on any FLOCK orders. Cancellation requests will take effect after the most recent paid order has been shipped.