The Scrap Therapy Mini Scrap Grid interfacing was developed following the publication of the book, ScrapTherapy, Scraps Plus One! 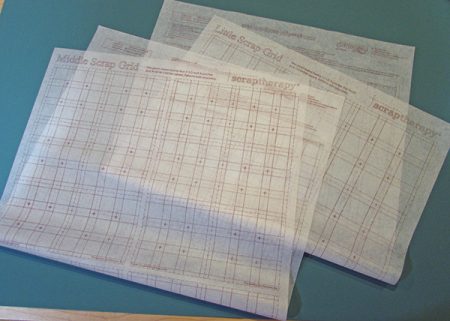 Essentially, except for the scrap fabric sizes used, the instructions for Middle and Little are the same, so you may see the samples flip from one size to the other in this tutorial. And I bet you won’t even notice the difference!

First, trim any extra interfacing away from the cluster to avoid getting the fusible glue on the iron, then place the grid on your ironing surface, fusible side up. Arrange scrap squares (1.5″ scraps for Middle and 2″ scraps for Little) on the grid aligned with the dotted lines. Then press with a hot iron with maybe a puff or two of steam, no more. 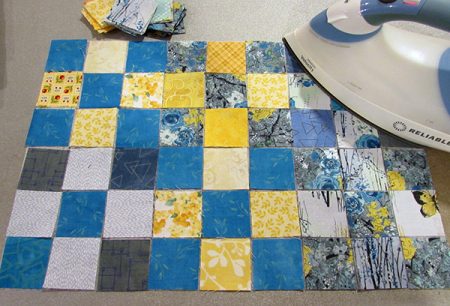 Next, we’ll sew the vertical seams (see the red arrows at the top?). 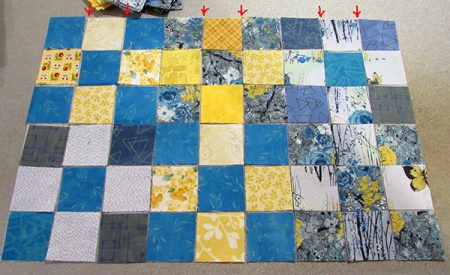 Once you’re certain the line is aligned front to back, secure the layers with pins . . . 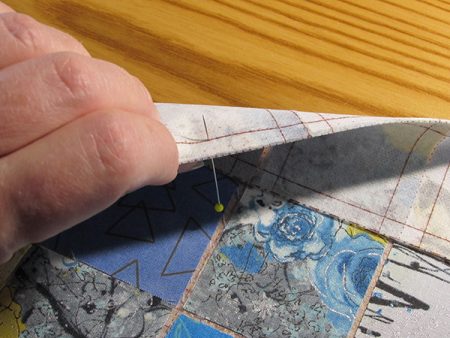 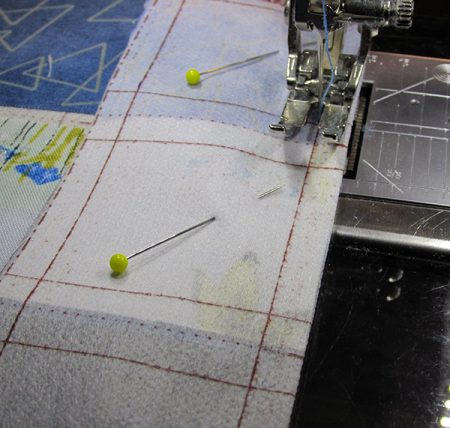 Before moving on to the next fold and seam, double check to make sure the sewing on the bobbin side falls right in line with the printed line on the interfacing. Then fold, pin, and sew the next seam as before. 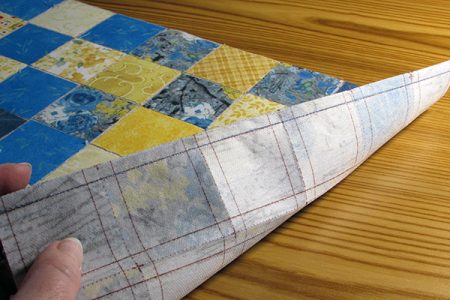 Here’s another difference between the Mini Scrap Grid and Middle and Little, the solid sewing line appears along all the dotted folding lines and dot-dash cutting lines. This will come in handy for some of the patterns using Middle and Little. To make basic 9-patch blocks, you’ll want to skip the seams where there is a dot-dash line! 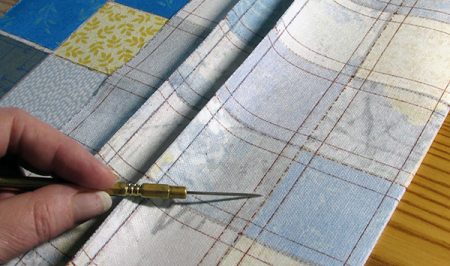 Once all six seams are sewn, this is how the interfacing side of the panel cluster looks. Next we’re going to sew the horizontal seams (red arrows on the right). But before we do that, snip the seam intersections at the cross-hair markings that look like an extra bold PLUS sign (+), circled in red.

When you snip, be sure to cut through the stitching! This is really important. 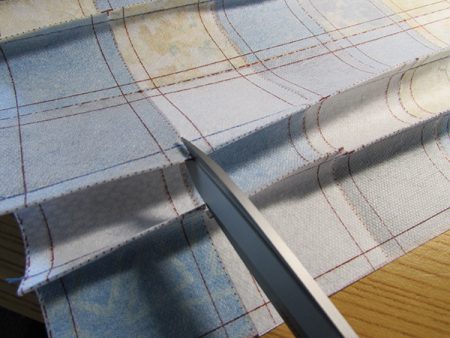 Notice that I didn’t snip at the big dots or where the dot-dash lines intersect. Those lines are there for some patterns, but not used when making a basic 9-patch block. 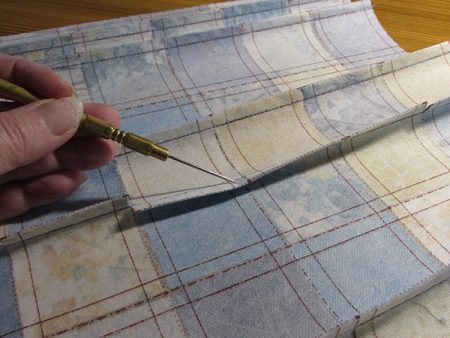 To sew the horizontal seam, fold on the first horizontal dotted line. Like before, make sure the dotted line falls directly on the turn of the fold and that the solid lines are in line front to back. IN ADDITION, nest and oppose the seams so they create ‘innies’ (seams finger pressed toward each other) and ‘outies’ (seams finger pressed away from each other) in each 9-patch-to-be. See the red arrows? On the front side, the seams and arrows are going toward each other and on the back side the seams and arrows are going away. Be sure to snap the seams into place like you normally would when piecing without interfacing. 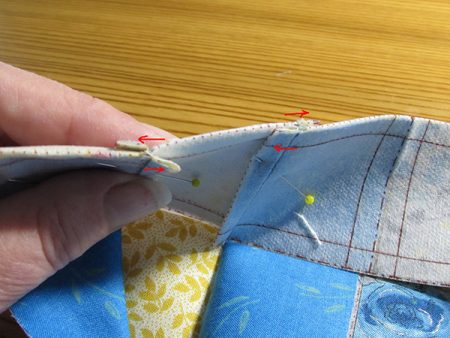 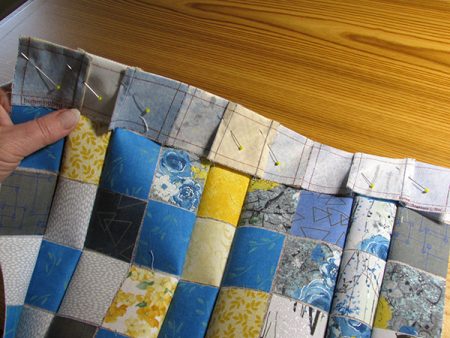 Once the seams are secured with pins, sew on the solid line as for the veritcal rows.

Once again, for the basic 9-patch block, skip the seam nearest the dot-dash line. 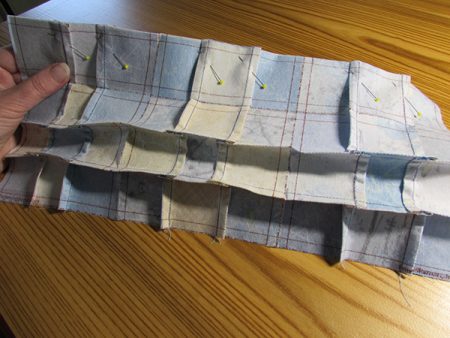 All the seams are sewn. Here’s the front view. It’s a bit of a hot mess because we haven’t done any pressing (except finger pressing) since we fused the squares to the interfacing way back when. 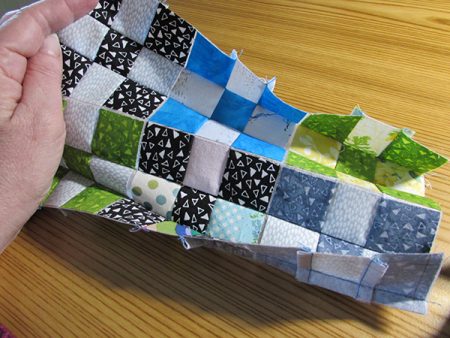 Flip the cluster to the wrong side and you can see those innies and outies! 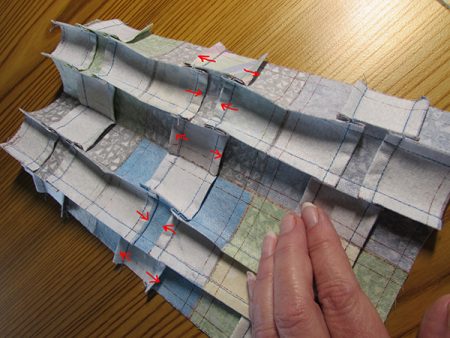 Cut the 9-patch blocks apart on the dot-dash lines. 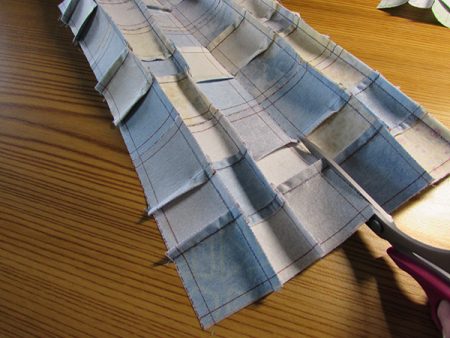 I love to furl (it’s also called pop, twist, twirl) the seams. This is particularly common with 4-patch blocks, and it compresses the bulk at the seam intersections beautifully. But you can also furl the seams in 9-patches as long as the seams have been pressed alternately (the innie and outie thing again). To furl, before pressing the block, pull out the last two or three stitches between the fabric fold (this is close to where the interfacing was snipped earlier). Repeat this on both sides and for all four seam intersections on each block. 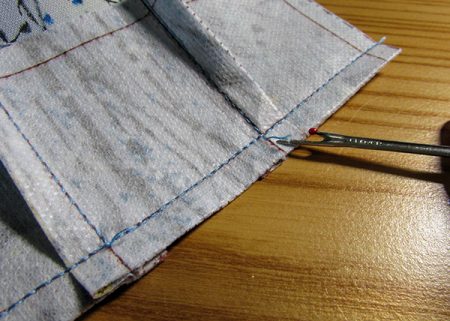 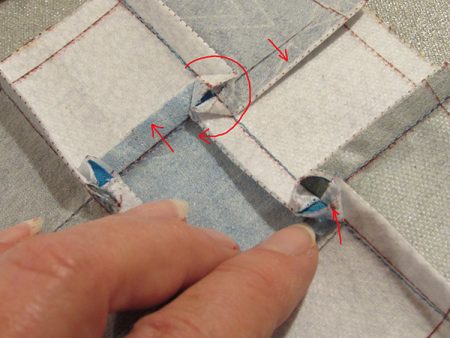 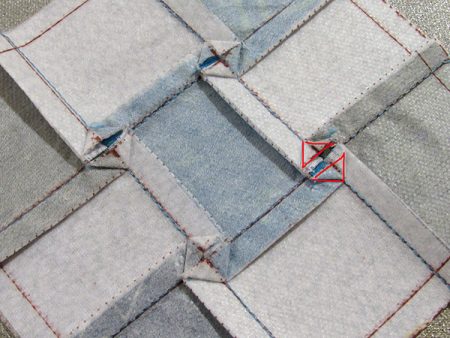 Then press from the right side. 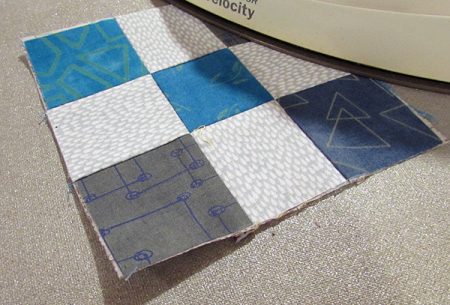 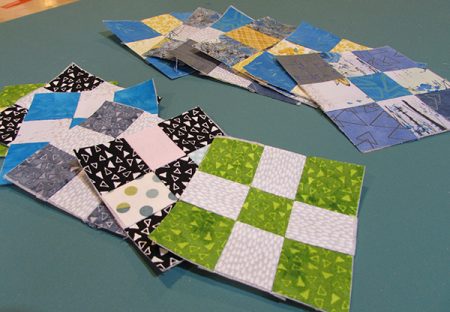