Several of the kits for The FLOCK have some tricky units. They’re tricky because the shapes involved are smaller, but unusually odd-shaped. So, it might be difficult to place the seam accurately.

The American Goldfinch, released in April 2019, has a couple of these ‘tricky’ spots, particularly Unit 4 and Unit 6. If you keep scrolling, you’ll see a second example from the May 2019 kit, the Cedar Waxwing, Unit 3.

This tutorial walks you through a technique you can use whenever you have an odd-shaped piece and you aren’t sure exactly where to sew the seam.

Unit 4 from the American Goldfinch block starts out like any other of the pieced units, there are four pieces, A, B, C and D.

You’ll notice that C is a really wacky shape. I’m going to show you a strategy that can help you keep the piecing accurate for odd bits like this. 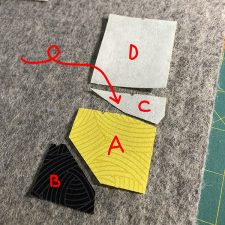 As usual, start by sewing A to B and pressing the seam as instructed (toward the black fabric)

Then notice that there is a weird angle cut away from A – that’s the same angle as the to-be-sewn seam. 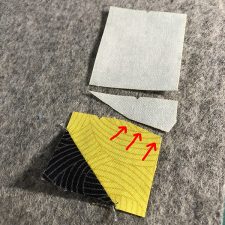 When you place C on top of A, everything aligns nicely, but you’ve got a bunch of straight edges here, which one will be used to create the seam? 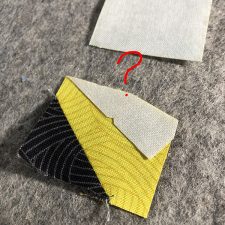 For this photo, I flipped the A/B/C unit upside down so you can see this perhaps like you might work on it.

I’ve aligned the 1/4″ line on my ruler with that cut angle (the one with the four arrows pointing to it two pictures above). . . 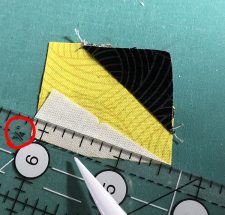 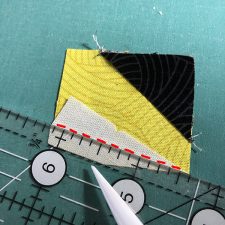 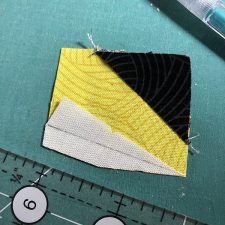 Then sew on the line. (I’ve flipped the unit again!)

You can start sewing from either end, but I like to have the smaller piece on top (usually) so I can keep an eye on it. 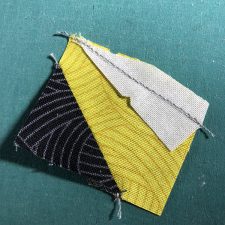 It’s helpful to chain piece (sew a seam, take a couple of stitches between units, then sew the next seam) and/or use a straight stitch needle plate (one with a single hole for the needle to pass through as it grabs the bobbin thread as opposed to a slot to accommodate decorative stitches) to avoid having the points of your piecing pulled into the bobbin area. 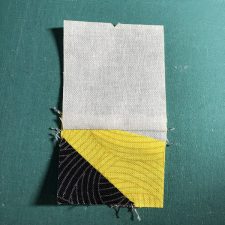 Consider using these steps whenever you have a unit that is oddly shaped and you can’t quite tell where the seam should go. The same technique may come in handy with Unit 6 also.

Let’s jump to a different bird block, but similarly odd-shaped pieces involved in the construction.

Unit 3 has four pieces. And they’re all pretty wonky shapes.

To stay on track, work one element at a time. Start with the units laid out similarly to the unit diagram.

First let’s look at the seam that connects A and B.

Flip B as if the dashed line were a hinge and B edges should align with A edges pretty nicely – see the next picture. 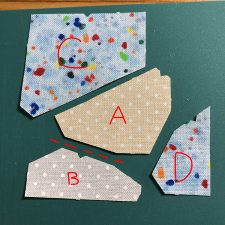 Great! But that still doesn’t help me see where I need to sew! 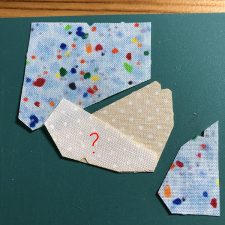 Grab a ruler with a reliable 1/4″ marking, line up that 1/4″ marking with the straight edge right were that ‘hinge’ used to be. (the dashed line in this pic), The arrow shows you where to draw a line. 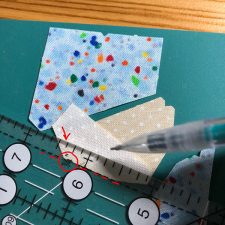 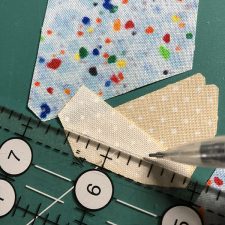 That’s the seam line, now you don’t have to guess where to sew. . . 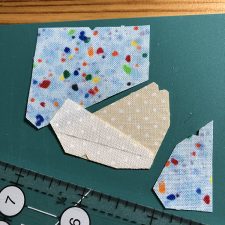 Then press toward the brownish buffy fabric.

Before continuing, I like to replace the element back into the unit on my work table where it belongs. 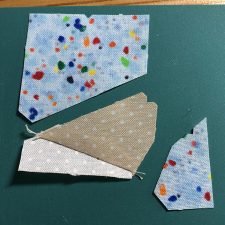 Next, flip C (the big blue speckled piece at the top) along that imaginary hinge and line up the edges as shown.

Because C has no seams and AB has a seam in it, in this case, I flipped the unit so fewer seams will interact with the seam allowance as I sew. 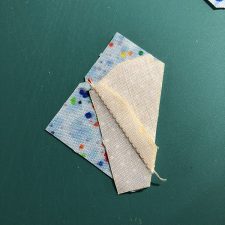 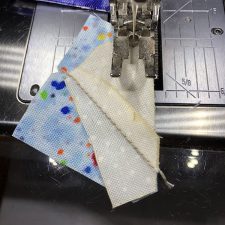 D is next! Look for the imaginary hinge. Can you see it? I don’t have it marked here. . . 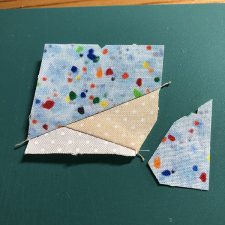 . . . But when you flip D right sides together with ABC, the solid line shows the ‘hinge’ and the dashed line is where I’m going to sew. If you are more confident marking that line with a pencil like before, then do so. 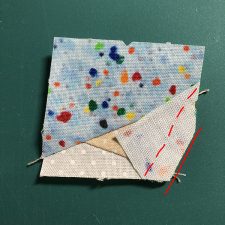 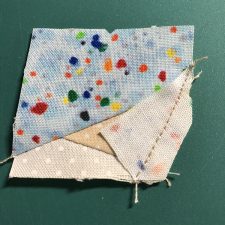 Now D is pressed and the unit is complete.

This unit is indeed a little bit tricky. but if you follow these steps, one at a time, you can do it! . . 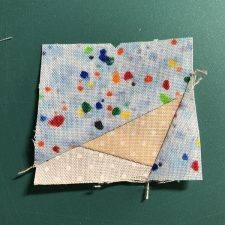 Hope this is helpful! Happy FLOCK-ing!